The show is much like the original “Fixer Upper,” with Chip and Joanna renovating houses in Waco, Texas.

The show is produced by the Magnolia Network, and it’s available for streaming on Discovery Plus. It premiered on January 29.

On Friday’s episode, the design duo worked on their employee John’s home.

John is a New York native, and at the time the episode was filmed, he had just purchased his first home in Waco, Texas, after relocating to work for Chip and Joanna a few years ago.

“I’m confident now that you’re probably not firing me,” John joked when Chip asked why he waited to buy a home.

The 2,100-square-foot house has three bedrooms and two bathrooms, and the large window in the front of the home drew John to it. He shares the home with his dog, Dylan.

When discussing the renovation, John told the couple he likes a modern and bold design.

Chip and Joanna said it would be easy to incorporate John’s taste into the renovation, as it already had a solid foundation, allowing them to focus on design.

Chip and Joanna gave the house’s exterior a fresh look.

They power-washed the brick, and they painted the trim and shutters to give it a fresh look.

Chip and Joanna also removed the pillars from the front stoop and added modern light fixtures.

A new door adds to the street appeal, and energy-efficient windows match it.

Before the renovation, the entryway had light-blue walls and a dated doorway.

The entryway was full of corners, making it feel small and crowded.

Plus, the paint, tile floor, and doorway look old-fashioned, which isn’t the vibe John wanted the home to have.

By opening up the entryway, Chip and Joanna made the whole house feel bigger.

They tore down the walls in the entryway and replaced the dated floor and ceiling, using white paint and hardwoods to modernize and brighten the space.

By using an architectural wall that has a walnut-wood bottom and metal and glass top to enclose the office, Chip and Joanna gave the home a modern feel.

Chip and Joanna decided to turn the front room into John’s office.

The room was designed as a formal dining room, but John told Chip and Joanna he didn’t have much use for that.

The size of the room made it ideal as John’s study, but the setup made it feel smaller than it was.

Plus, the carpet and blue paint had to go.

The flooring, walls, and fireplace in the living room looked dated.

The room was enclosed, which John said wasn’t ideal for him, as he’d like to be able to look at the kitchen from the living room.

He also liked that the space had a fireplace, but the look of it wasn’t right for the home he envisioned for himself.

By knocking down the wall to the kitchen, the living room felt more spacious.

The updated fireplace and extended hearth bring the room into modernity. The small accent wall separates the kitchen and living room while keeping the space open.

The glass wall to the office demarcates the space, and it doubles as decor for the room.

The black window frame and fan add to the modern feel.

The kitchen was dark, small, and in disrepair before Chip and Joanna updated it.

The wood cabinetry had an old-fashioned look, and the appliances were fairly dated as well.

It also didn’t have any space for eating, which wouldn’t work for John since he didn’t want to use the front space as a dining room.

But the room had a large, tile-floored pantry, which Chip, Joanna, and John decided to make part of the kitchen.

Now, the kitchen is spacious and modern, with the statement island acting as a centerpiece of the room.

By tearing down the wall to the pantry, Chip and Joanna made the kitchen much larger than it was when John bought the home.

The modern cabinets, counters, and appliances elevate the space, and John has ample areas to dine thanks to the table and island.

Open shelving and color make the asymmetrical island stand out in the room, and the space even has a built-in coffee frother.

John didn’t need the walk-in closet, so Chip and Joanna decided to give him a dream bathroom.

The original bathroom was quite small, and since John wasn’t going to use a walk-in closet, it made more sense to convert the space into a larger bathroom and turn the bathroom into a closet.

Chip warned that the change would be expensive, but it was worth it to John.

The black tile gives the bathroom a sophisticated feel.

The new bathroom was large enough for a double vanity, giving John more space for his day-to-day routine.

Black terracotta tile and a glass shower make the space look modern, and Chip and Joanna also added a floor-to-ceiling window to the room for natural light.

The space also has a linen closet for added storage.

Sun Feb 14 , 2021
Winona Elmore just opened her dream store in Rockport, a farmhouse decor boutique named Collecting Thyme, opposite of Midcoast Recreation Middle on Route 90. Her grand opening was Saturday, February 6. “I experienced a eyesight of a place wherever people could appear to come across gorgeous items for their house,” […] 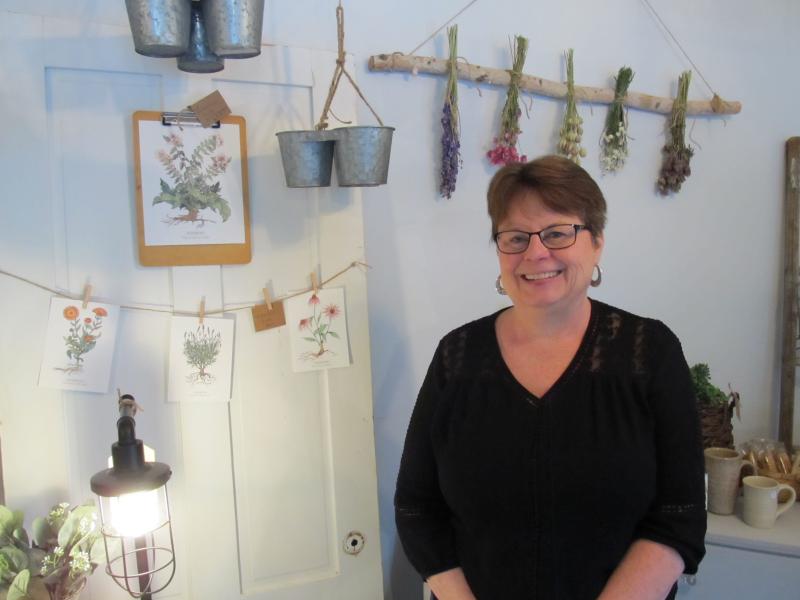