When Kathryn and Jeff Regan bought their West Hartford house in 2008, one of the selling features was its newly renovated kitchen. With cherry cabinets, granite countertops, lots of storage, big island and updated appliances, the 2,700-square-foot home and its kitchen were move-in ready. Yet, while brand new, the kitchen wasn’t exactly their cup of tea.

“It was on the darker side with darker cabinets, darker countertops, but super functional,” Kathryn says. “No issues. It just wasn’t really my style. But it also didn’t seem practical to renovate. We had bought the house because it had a great kitchen, so putting money into it just didn’t make sense.”

But, by 2018, she and her husband were ready to make a change, and once they did, a domino effect of renovation followed.

Not having a strong sense of design, and knowing her own limitations, Kathryn contacted local firm Georgia Zikas Design. After hearing about Zikas from a friend, and looking at images on her website, she felt that Zikas’ style mirrored her own.

However, while Zikas knew that she was tapped to brighten and lighten the space, she couldn’t get past the second-floor support column that came right down through the kitchen island. It provided a chase for piping to run from the upstairs bathroom, so when a toilet was flushed upstairs, it was heard in the kitchen. Since Zikas knew that the Regans were doing a renovation to a forever home, and not simply as an investment, she wanted to design it right.

“They had a nice-size island, but it could have been even bigger without this poorly placed beam,” says Zikas, who wanted to investigate removing it to open up the kitchen. “It wasn’t really bothering them, but I wanted to interview a few contractors and get some bids.”

After learning that the column removal came with a hefty price tag — about $25,000 — on top of the regular renovation costs, the Regans got cold feet. “This was a big pill to swallow and more than they had bargained for,” recalls Zikas, adding that reengineering the ceiling and redistributing the weight were the costliest parts.

“I said, ‘I could absolutely demo this kitchen and give you a beautiful light and bright kitchen, but unless you’re going to remove this column, I don’t want to waste your time or money,’ ” Zikas says. “In my opinion, it was just bad design.”

Kathryn put a three-month pause on the project before saying, “Let’s do it right,” in the spring of 2019. “I’m not sure if Georgia would have taken the project if I had said that I wasn’t removing the column,” she laughs.

Dahlstrom & Sons of Farmington brought in a huge I-beam and opened up the ceiling to provide load-bearing support, enabling the Regans to have a seamless, open plan with a 10-foot island. Marble countertops with a geometric, three-dimensional backsplash add interest to the custom kitchen, and new GE appliances and a Fisher & Paykel cooktop round out the space. To bring in more light, Zikas added a picture window above the sink to replace a smaller one.

Zikas’ plan included widening the doorway to the dining room. She also added a pantry wall, giving them much more storage, by relocating the basement door to face the dining room. And while the kitchen was already open to the family room, she modified the design of a support column with a newly designed bookcase.

As most of Zikas’ projects do, phase two continued upstairs. She modernized the primary bedroom with new window treatments and bedding, along with some electrical work. Primary and guest bathrooms were also renovated. Both include small, hexagon-shaped floor tile and rectangular Asian Carrara marble tiles on the walls, which was intentional for continuity as the bathrooms are adjacent. The main bathroom features a double sink with a concrete vanity top, while the guest bathroom has a quartz slab. Wall-mounted faucets allow for more space for the countertop, cleanliness and a streamlined look.

Back on the ground level, a new sunroom also became part of phase two. Previously a screened-in porch, Regan says that it was a “catchall for sports equipment and everything else. It just didn’t look very nice. Something had to be done.” Started in summer 2020 and finished in spring 2021, it’s now a four-season space with a small heating unit.

While the footprint didn’t change, the new room adds about 400 additional square feet of heated living space. All new windows and a double screen door were added to an existing bluestone patio. By hollowing out the ceiling, the sunroom feels grander. And a wood ceiling, painted brick, porcelain tiles in a blue-gray slate color over the slab subfloor, new furniture and an indoor-outdoor rug all add elements of materiality.

Kathryn turned to Zikas for design decisions throughout the house, including all new furniture, custom pillows and drapery, and artwork. Zikas collects and curates from a variety of trade resources. Two examples are a custom swivel chair in a richly textured bouclé fabric piped in blue leather by Highland House and a custom oversize storage ottoman for the family room that she designed and had made by Middletown furniture maker Oak & Velvet. Here, too, is where a sheep footstool takes center stage because Zikas likes to add something whimsical to each project.

“I don’t have a design eye or the time, so I leaned on Georgia to take over and make decisions,” Kathryn says. “I’m not super picky. I really trusted her design expertise and her style. She would pick out three different curtains, for example, and I would pick one. When the sheep first showed up, though, I questioned it. But it’s definitely part of the family.” 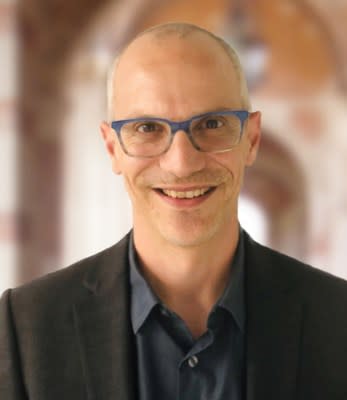